Miumori Genmaicha is produced by the Hayashi’s, a traditional tea Japanese tea growing family in Kirishima on the island of Kagoshima.

Its special quality is that roasted brown rice is added to Bancha, creating a uniquely robust, wholesome and satisfying rice with the floral depths of quality Japanese green tea.

Miumori Genmaicha is produced by the Hayashi’s (pictured below), a traditional tea Japanese tea growing family in Kirishima on the island of Kagoshima. 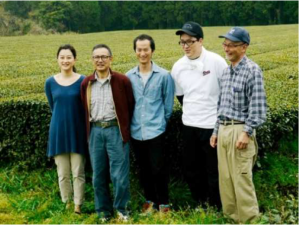 Using time honoured methods, passed through the generations, no chemicals are used in their process. Genmai Cha is green Bancha (in this case Miumori cultivar bancha is used)  with roasted brown rice blended into it in order to augment its flavour and aroma.

Folklore has it that this tea was originally drunk by peasants as a way of supplementing their diets. Some say that tea, a relatively expensive commodity, was weighted by the addition of rice in the market place as a way of making it go a bit further.