The world of tea is as fascinating as it is varied, but for that reason it can be difficult to know where to start. One of the ways of accessing tea is to think of it as a special rainbow; white, green, oolong (sometimes known as blue tea) and black or red tea. There are other tea colours that can be further refracted in this spectrum, including yellow tea and true black tea.

Each colour or group of tea can be refined to an astonishing degree too. It’s taste can hold the whole story of where it came from and who produced it, from the country of origin to the person who picked it. This is why we, at Tchai-Ovna, love high grade tea as each kind has its own discernible experience.

Green tea is a fascinating world unto its own. Though all tea plants, Camilla Sinensis and Assamica, can produce green tea, in theory it is the original tea growing nations that do it best, namely China and Japan.

All the colours of the tea rainbow are oxidised, but white and green tea is only done only lightly. Oxidisation is when the tea is withered for a certain period of time which has the effect of changing the taste and chemical state of tea. Because green tea is lightly oxidised it retains much of the essential oils and nutrition gifted to it by mother nature. These include a large concentration of anti-oxidants and minerals including the powerful anti-oxidant ECGC (epigallocatechin gallate), vitamins A B C and D, zinc and manganese. Withering processes differ widely, but most traditional in China and Japan is to leave them under the sun. The tea is then heated in order to stop the withering process and dry it. The traditional Chinese method is to heat it on a wok on and off for several hours, something which takes a lot of skill and dedication. The best Longjing is still produced in this manner.

Longjing, also spelled Lung Ching, means literally “Dragon Well”, is a particular favourite of mine, and indeed is a good green tea for beginners and connoisseurs alike. Good Longjing to me has a satisfyingly full bodied, vegetal taste with only a hint of astringency, a touch of paddy field and a nice enveloping sweet after taste. Its leaves are vividly green and when dry are flat and folded, its colour is a light green yellow.  It is fully deserving of the term “emerald dew”. 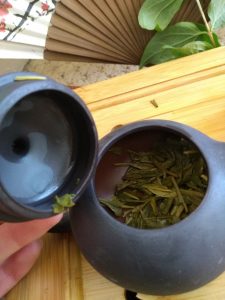 Not only does Longjing have an exquisite taste, but it has a really fascinating mythology surrounding it… after all it is called Dragon Well. Back in the 17th Century Emperor Qianlong discovered it on holiday at the West Lake, Zhejiang province and was so impressed that he granted all 18 bushes of it imperial Gong Cha status. The 18 bushes which he found in the grounds of the Hu Gong Temple under Lion Peak Mountain still grow there to this today. Apparently, the reason why the leaves are dried flat folded is to commemorate the fact that he pocketed some to bring back to his mum!

At Tchai-Ovna we believe that the Gong Fu (kung fu) method of preparation gives true credit to the taste, craft and heritage of the tea, allowing it to truly come into its own. Below is tchaiovnik Sandra using the kung fu method to make Longjing at home in “lockdown”. The moist leaves will release a delicious jungle-like aroma. Indeed the tasting of tea should use the three senses, sight (the way the tea looks and is presented), smell (to appreciate the scent when it is dry and rehydrated) and taste.

If you would like to truly get to know Longjing, why not buy some of our ethically sourced variety and become part of the story!