Tchai-Ovna House of Tea was made by friends and volunteers in 2000, and is the brainchild of Edinburgh born brothers Martin and Robin Fell. Though hidden away on an iconic Glasgow slatted back lane, a bohemian nest of independent artisan businesses, Tchai-Ovna became perhaps the best known tea house and venue in Scotland, with 1000’s visiting our cobbly ancient stable premises every week. Tchai-Ovna is inspired by Czech tea houses – Čajovny – which can often be discovered down old back lanes in virtually every large and small historic Czech historic. They serve as a bohemian counter-culture to pubs and clubs, as well as a reaction to big business capitalism introduced after the 1989 Velvet revolution. Starting underground in the 1980’s, their concept was to bring the world of tea under one roof – or Arabic tent as was originally used. Growing up partly in Prague, the Fell brothers frequented some of the lovely tea houses, tasting and learning about tea, whiling away dreamy hours reading, playing chess and talking with friends. The Fell brothers dreamed of starting their own tea house. When Martin came to study at Glasgow University in 1998 he realised that this is exactly what was missing in a city famed for its culture and nightlife. In late 1999 upon being introduced to the premises, a stables built in 1825 on a lane that used to be an ancient historic highway to the Highlands, by university friends (founders of the top reggae sound system Mungo’s Hifi) the Fells began work to convert the premises into a tea house. The conversion was funded largely by student loans and scavenging materials from building site skips, and dozens of friends and associates from all areas Glasgow’s society. Finally on 7th May 2000 the tea shop opened its doors and was on its first day flooded with customers as it had already become an urban legend. Today, it still has legendary status as the first truly specialist tea house in Scotland, but also as one of the last bohemian hang outs in a city scape which is increasingly more “boho chic” than just plain old “boho”.

The original team of volunteers was just as eclectic as the shop they helped create and run. There were many and all now at Tchai-Ovna are eternally grateful for their help, without which Tchai-Ovna wouldn’t be what it is today.

Mikael Madsen. Born in Denmark and raised on Scotland’s Isle of Bute, he had been a first year student of Aerospace Engineering at Glasgow University in 1998 aged 17 when he met Martin at halls and became best pals. Described often as a “mountain” he was extremely strong and famously by himself carried all the decking for the Tchai-Ovna veranda on his shoulder from Anniesland to Hillhead (3 miles!). Mikael was very talented at carpentry – very handy in the making of the shop and veranda!  He went on to study Viking Studies in London’s Queens College but sadly passed away aged 31 from pancreatitis.  (Mikael pictured below). 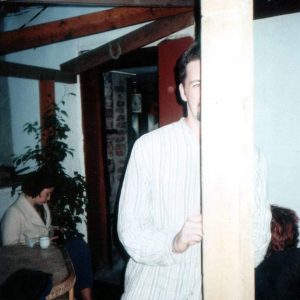 Craig Nelson. Originally from Eaglesham, Glasgow, Craig was long regarded as an urban legend unto himself. He is a avantgarde jazz saxophonist, beat poet, novelist and artist. Craig and Martin met busking on Sauchiehall Street, Glasgow, and variously flat shared. Craig grafted for months with Martin to the repair the walls and floors of the stable premises, with a particular talent for cementing and concreting – all the while wearing his silver space shoes. Here’s a photo taken at Nelson’s squat in March 2000. 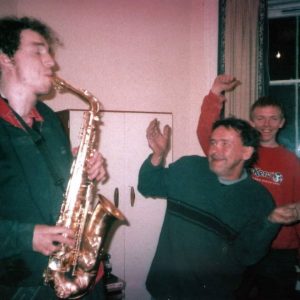 Andy and Gordon are pictured above (Gordon right, Andy middle). Andy of Possil Park, Glasgow, was a Scottish Romany grew up and performed at a circus, and by the time of this photograph was still adept at back flips and somersaults. Andy was partially homeless in March 2000 and suffering from alcohol addiction  when he met Martin on Otago Lane collecting “ginger bottles” and scrap metal (ginger bottles are the glass bottles that produce fizzy pop produced by Barr’s and are recyclable for 20p). He volunteered in a lot of the hard graft of the creating of Tchai-Ovna for cigarettes and sandwiches, bringing his skills as an electrician to the team. He eventually gave up alcohol for a time, switching to Gunpowder green tea. Gordon, of Possil Park, was Andy’s adopted son and 16 when he volunteered for the Tchai-Ovna project from February to May 2000. Apart from being a thoroughly lovely chap he also had a talent for carpentry and an incredible work ethic.

James Bagshaw is from the Isle of Lewis, Scotland. Martin met James in halls of residence and became good friends. Growing up in Lewis as the son of an architect, James had learned some joinery and building skills helping on building sites. James and Martin spent many many hours squeezing cement into holes in the back wall of the Tchai-Ovna premises. After working for years as a Tchaiovnik, James went on to become a critically acclaimed vegetarian chef and has receintly (2020) qualified as a professional carpenter.

Douglas Paine, from Manchester, England, met Martin whilst studying Slavonic Studies at Glasgow University. Douglas had experienced the Czech tea house culture on his year out in Prague. Douglas introduced Martin to the Otago Lane premises in November 1999 – at the time occupied by bohemian artist, musician and mechanic Pol Morgan. Douglas was namely interested in the silver bus which Pol had made from the body of a greyhound bus grafted to a lorry. This became the band wagon for the fledgling project, Mungo’s Hifi – a reggae DJ sound system project that went on to become world famous. When Tchai-Ovna opened in May 2000, Doug volunteered for several months before moving on to pursue his musical career.

Originally from Montrose, Scotland, Kenneth Shand first became involved in the Tchai-Ovna project in May 2000. Martin and Kenneth had been friends for several years, meeting at Glasgow University and sharing the same circle of friends. Kenneth is a talented writer of poetry and prose, and was very active in the literary scene. Kenneth went on to become co-director of Tchai-Ovna, and today is one of the three shareholders of the company. Without Kenneth’s hard work and dedication for over 20 years, Tchai-Ovna wouldn’t be what it is today. (Kenneth is on the left, and Martin Fell is on the right, of this photo taken c.2000). 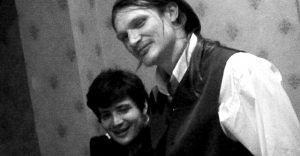 Tchai-Ovna has always been not just about the tea, but the culture that surrounds it. From the very first day we have had a very full schedule of live music, literature readings and exhibitions, promoting local and world class artists alike. Belle and Sebastien shot their album work, Dear Catastrophe Waitress, here; Franz Ferdinand frequented the premises and some members played here pre-Franz Ferdinand; Scarlett Johansson graced the “wee haven from the public glare” twice whilst filming in Glasgow. Perhaps more importantly, the clientele is truly representative of Glasgow’s vibrant multi-cultural community – perhaps because it has never been an alcoholic establishment and it serves an eclectic menu of food from Latin American dishes to Moroccan. Thanks to Tchai-Ovna being a multi-cultural hub, we have learned fascinating things about tea, striving to satisfy at times very exacting clientele with recipes of tea they would be more used to having with their grand parents. We perfected our Yogi Chai (based on an Indian recipe for Chai Masala) through years of making it fresh every day; we learned our Pakistani Desi Chai from our Pakistani Scottish customers; we learned the finer art of the kung fu ceremony from visiting Chinese masters who saw our tea house as a destination in Scotland. In a sense we have become a magnet for all things tea related, the world of tea came to us. The great thing about tea is that it is the ultimate leveller, no matter your ethnic, religious or political background, you can always enjoy a cup of tea together – it transcends cultural differences at the same time as representing the culture from which it originates. We are really proud to have contributed to this positive multi-cultural coming together. In these days of political and health extremity, it is important to remember that we are all one – in Scots you might say “mony a meickle maks a muckle” – and a good cuppa helps to remind us of this!

When you purchase a bag of our speciality tea, you are not just buying some tea, but you are experiencing a special, unique culture.