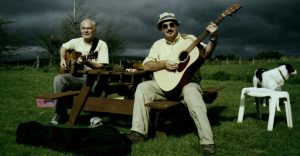 Wing and a Prayer (Dave Dick and Jim Gilbert) are two singer-songwriters strongly influenced by the blues.  In additional to playing re-imagined versions of classic blues, folk and jazz songs the duo perform their own well-crafted material.

The duo have performed regularly in Tchai-Ovna for the past decade and have made a real name for themselves on the blues scene in Glasgow and Central Scotland.

Pop down on the last Friday of the month to catch Wing and a Prayer.

Wing and a Prayer on the Web